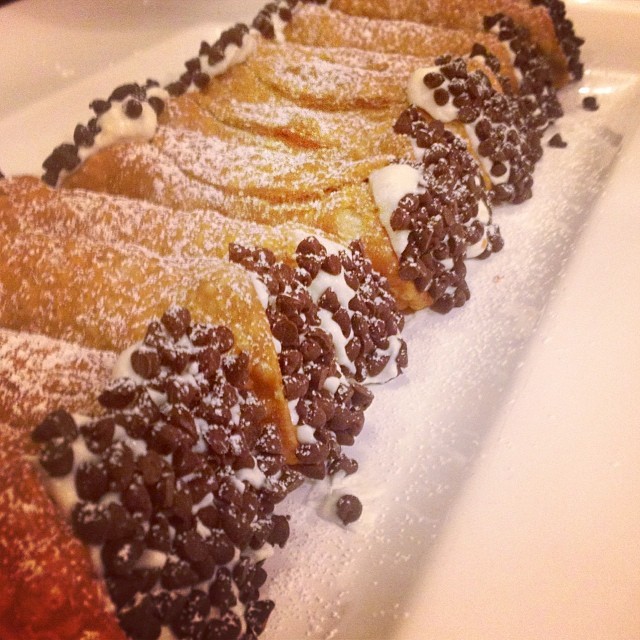 For the shell:
Sift together the flour, sugar and salt. Work the butter pieces into the flour with your fingers until the mixture becomes sandy. Add the egg yolk and the white wine and mix until it becomes a smooth dough. Spread a piece of plastic wrap on a flat surface and place the dough in the center. Wrap the plastic loosely around it and press the dough to fill the gap. Flattening the dough will mean less rolling later. Let it rest in the fridge for a few minutes while you make the filling.

For the filling:
Whisk the ricotta until smooth. Sift in the powdered sugar, cinnamon and spices. Mix to blend. In a separate bowl (or in the bowl of an electric mixer fitted with the whisk attachment), beat the heavy cream until fairly stiff. Gently fold the cream into the ricotta mixture. Stir in the chocolate chips. Lightly zest the exterior of the lemon and stir it into the ricotta. Refrigerate for a half hour to an hour.

To roll and fry the shells:
In a medium pot with a heavy bottom, heat the canola oil to 360 degrees F. Meanwhile, sift an even layer of flour on a flat surface. Flour a rolling pin. Roll the dough until it is very thin (about 1/8-inch thick). Cut the dough into fourths and work in small batches. Use any glass or small bowl that has a 3-to-4-inch diameter. Cut rounds, tracing around each one to assure the dough has been fully cut. You should have about 24 circles. Wrap each circle around a cannoli mold. Use a little of the egg wash on the edge of each round to seal it shut and to assure it won’t slide or fall off the mold before pressing it closed over the mold. Fry for 2 to 3 minutes. Remove from the oil, and holding the mold in one had with some tongs, gently grip the shell in your other hand with a kitchen towel and carefully slide it off the mold. Set aside to cool. Repeat with all of the circles.

To fill the cannolis:
Just before serving, use a pastry bag without a tip to pipe the ricotta into the cannoli molds. Fill the cannoli shells from both ends so the cream runs through the whole shell. Dust with powdered sugar.

Don’t fill the shells with the cream until you are ready to eat them.

Everyone sees what you appear to be, few experience what you really are! I usually give people more chances than they deserve but once I'm done, I'm done. I'm a bitch with wifi
View all posts by mogway →
This entry was posted in Cooking with Amber, Deserts, HazelRae Wildrose and tagged cannoli, cream, desert, shell, snack. Bookmark the permalink.

This site uses Akismet to reduce spam. Learn how your comment data is processed.